Recent Laws on Using Your Cell Phone While Driving 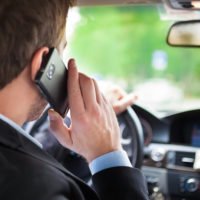 Use of cell phones while driving including dialing, talking, surfing the internet and texting are subject to and vary between state, city and county. Some studies confirm that banning cell phones has led to a reduced number of vehicular fatalities, while other show such a restriction had a negligible effect on the incidence of crashes. Regardless, distracted driving is responsible for a substantial percentage of crashes and fatalities, no matter the particular behavior.

There are 44 states that ban text messaging by minor and adult drivers but five of these states require that the driver be in violation of some other law or ordinance before the officer can stop the car, considering cell phone use as a secondary violation. Montana and Arizona are the only states that do not ban text messaging for any drivers though the city of Flagstaff, Arizona recently passed an ordinance banning texting, even by bicyclists, though you can still do this if stopped at a traffic light or pull off to the side of the road. To confuse the manner, Coconino County, where Flagstaff is located, has banned all handheld cell phone use. Phoenix and Tucson also ban text messaging.

California cell phone laws ban the use of handheld phones for all drivers and all cell phone use by transit and school bus drivers and drivers under 18. No driver may text while driving and this is considered a primary offense.

In March of 2014, the New Hampshire legislature banned the use of handheld cell phones by all drivers while banning hands free devices by those under 18. The law also prohibits the use of a cell phone while stopped at a traffic light. You can still use a phone to call 911 or other emergency services.

A California appellate court’s ruling allowed for drivers to use the GPS function on their cell phone, the reasoning being that using the phone as a GPS did not pose the same risk as talking on a cell phone.  The driver in question was ticketed pursuant to the state’s ban on any handheld cell phone use, but the court ruled that this was not the intent of the statute. Still, law enforcement officials said that regardless of the court ruling, any driver who is not focusing on driving, whether it be yelling at kids in the back seat, drinking coffee while staring out the window, or gazing at your GPS map, constitutes a distraction and is a violation.

Distracted Driving is a Factor in Causing Accidents

Distracted driving is a factor in 80% of all accidents, whether it is cell phone use or some other behavior that takes the driver’s focus off the act of safely operating a motor vehicle. It should come as no surprise that most distracted behavior does involve some use of a cell phone.

If you or a loved one was injured or killed in an auto accident in which the other motorist had been using a cell phone, regardless if the driver was looking at the phone GPS or conversing on the phone, this may constitute negligent driving and form the basis for a personal injury or wrongful death action. While your state law may permit adult drivers to use hands free devices, if an accident occurred and the other driver was talking on the device and failed to see your car and crashed into it, your attorney can assert that this behavior was below the standard of ordinary care required to be exercised by a motorist under similar circumstances. It also violates the law on driving while distracted.

If the motorist was using a handheld device in violation of the law and the distraction led to a serious or fatal accident, it may lead to an increased criminal penalty in California but it may not necessarily constitute willful indifference or conduct so egregious or malicious that punitive damages could be sought in a civil action. The same may be true of impaired drivers who cause serious or fatal accidents unless their blood alcohol was twice the legal limit or more.

If you were in a car accident or motorcycle accident involving the other driver’s use of a cell phone, book a free consultation with Andrew Ritholz to learn more about your options of recovery.