In California, If A Driver Hits Me While I am Jaywalking, Is He At Fault? 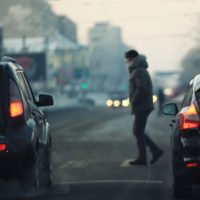 Jaywalking is the act of crossing the street while not on a designated crosswalk. As a pedestrian, you have a duty to exercise reasonable care and to be safe. Though jaywalking is illegal and is typically an infraction and a violation, it is not a criminal offense.

If you fail to use an available crosswalk and a motorist hits you, you are at fault. But what about the motorist?

The motorist is also liable to some degree. For instance, the driver might have been engaged in some unlawful activity such as:

Drivers also have a duty to adhere to the standard of a reasonable person, or driver, under similar circumstances. If the driver was speeding, reckless or distracted, then he or she failed to live up to that standard.

Most states have a comparative fault statute that will allow an injured claimant who might have contributed to the accident to still recover, though their recovery will be lessened by their percentage of fault if it was less than 50%. California has a pure comparative negligence law, meaning that even if you were 99% at fault for the accident, you can still recover against the other responsible party or parties.

For example, if a jury determined that you were 80% at fault for jaywalking but the motorist was 20% at fault since he or she was distracted or speeding when you were hit, then you may recover only to the extent of the other party’s degree of comparable fault. In this example, if your damages are $100,000, you may recover only 20% of that or $20,000.

In many injury cases involving a jaywalking pedestrian, the investigating officer will place total liability or responsibility on the pedestrian. You should not simply conclude you have no case but contact an experienced personal injury or car accident lawyer to investigate the facts of your case. Sometimes a passerby or other motorist can provide testimony that the driver was on a cell phone or was traveling much too fast. If the driver was acting erratically, the motorist might have been tested for the presence of alcohol or drugs.

Contact Andrew Ritholz, an experienced California car accident attorney, today if you or a loved one was injured in any kind of car accident.