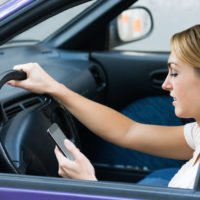 It can seem like distracted driving has almost become the norm these days. We’ve always had distractions in the form of talking to children in the backseat, fiddling with the radio, and even mentally going over conversations in our head which can steal focus and lead to poor performance behind the wheel. But in a world where we bring smartphones, TV screens, and tablets into our cars, we’ve got even more sources of distraction stealing our attention. Regrettably, the accessibility of smart gadgets has led to a serious increase in texting accidents.

The Dangerous Truth About Smart Phones and Driving

We know texting while driving is dangerous, but according to a frightening new study, it may be worse than you even think. Of those surveyed, about 7 in 10 drivers engage with their phones while driving. The majority text or check email. Each engagement results in several seconds in which the driver’s eyes leave the road. But these are not the only dangerous, distracted behaviors assessed by the study. About 4 in 10 smart phone users check social media while driving; nearly 3 in 10 surf the web; and 1 in 10 even find ways to video chat.

AT&T engineered the timely “It Can Wait” campaign to warn teenagers about how the deadly nature of texting and driving. The company has now decided to expand its campaign to include other smart phone distractions. Hopefully, easily unfocused teens will get the message. AT&T even developed an app that silences incoming text alerts, sending an auto-reply to the messengers that the recipient is behind the wheel. The app automatically turns on when you’re going more than 15 mph, and there’s an option to send a message to the driver’s parents if the app is disengaged.

Teens Aren’t the Only Ones at Risk

Of course, this proactive messaging is useful for managing teens, but young adults aren’t the only ones engaging in dangerous behaviors behind the wheel. Of the 2,000 people in AT&T’s survey, ages ranged from 16-65. Statistically speaking, a teenager is more likely to take a selfie while driving than her middle aged mother, but a salesperson checking her email behind the wheel also poses grave dangers to herself and others on the road.

Stay safe on the road. Texting accident attorneys routinely see devastation people could easily have avoided with some foresight. Texting and driving is a temptation of modern life, and it’s not the only one smartphones offer. Emailing, web surfing, and video chatting are all responsible for accidents and deaths on California highways.

Texting behind the wheel and then causing an accident is, in most cases, against the law, and would likely be sufficient grounds for proving negligence. If a negligent driver causes injury to another as a result of his or her negligence, then that driver will be liable for the full amount of foreseeable damages caused to another’s person and property.

If you’ve recently been hurt in an accident, and you believe a driver’s negligence or carelessness contributed to your injuries in some way, our experienced auto injury lawyers can help. Get in touch with our team to schedule a free, confidential consultation about your options.