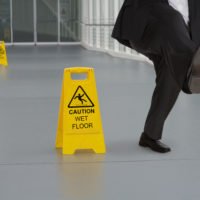 A slip and fall accident claim is part of premises liability law. This applies to an injury that occurs on private or public property as the result of a deliberate or negligent act that caused a hazardous or unreasonably dangerous condition that led to an injury. Different principles apply regarding the nature of the property and the status of the owner.

For instance, in California slip and fall cases, a business owner has a duty to inspect the property for hazards and to fix them or provide an adequate warning to persons invited on the property. Notice of the dangerous condition to the owner must be shown. If someone alerted the owner of the condition but nothing was done, liability may be imposed. Also, if the condition lasted long enough so that the owner should have been aware of it, which constitutes constructive notice, then liability may be found as well.

This failure to act or warn by a landowner that results in an injury is compensable for the injured victim. Damages include lost wages, lost earning capacity, medical expenses and pain and suffering. A spouse can also sue for loss of consortium if the injury was extensive.

Some slip and fall cases can result in fatalities or life-altering injuries such as traumatic brain injuries or paralysis. Many businesses carry liability insurance of at least $1 million to insure them against serious injury claims.

The following is a list of 5 large settlement cases in slip and fall matters:

Not all slip and fall cases result in multi-million dollar verdicts or settlements. It takes an experienced slip and fall California lawyer, like Andrew Ritholz, who also has the resources to handle such cases that are typically against large business owners or municipalities that routinely reject claims and hold plaintiffs to their proof. Consult with a Pasadena slip and fall attorney if you or a loved one has suffered a serious injury through the negligence of a business or other property owner.