How Likely Are You to Get into a Motorcycle Accident? 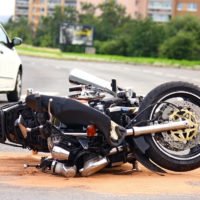 Motorcycle riding can be exhilarating, but it also comes with well-known risks to riders. California motorcycle riders experience a higher crash rate and a far higher fatality rate when those crashes occur than do passenger vehicle drivers. Learn more about the crash rates of motorcycle riders below, and contact a Pasadena motorcycle accident lawyer if you’ve been hurt in a crash.

Crash and Fatality Rates for Motorcyclists

How Likely is a Motorcycle Crash?

If you’ve been hurt in a Los Angeles county motorcycle crash, find out if you’re a good candidate to file a personal injury lawsuit by contacting the seasoned Pasadena motorcycle crash attorneys at the Law Offices of Andrew Ritholz for a consultation on your case at 626-844-7102.