Two Men Die in Pasadena Truck Accident on I-210 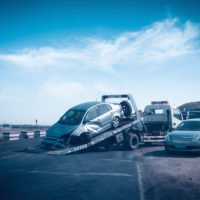 Five vehicles, including one truck, were involved in a deadly crash last month on the I-210 in the Pasadena foothills that caused the deaths of two men in one of the cars involved. The two men were both in a red 2004 Buick involved in the five-car collision were both from Marin County. The accident appears to have been set in motion when a truck collided with a jeep which set off a chain reaction of collisions, resulting in the deaths of the two men. Four other parties suffered injuries in the accident.

The Deadly Sequence of Events

At around 4:50 PM on July 15, a white 2007 Nissan Box Truck was traveling on Interstate 210 east of Sierra Madre Boulevard when it crashed into a 2012 Jeep Grand Cherokee. According to the California Highway Patrol, the truck’s collision with the jeep caused it to ram into the Buick, which crashed into the center divider where it was then struck by the truck. The truck’s collision with the Buick then caused it to crash into a fourth car, a 2006 Chevrolet GMC, and then a fifth car, a 2015 Hyundai then ran into the Buick.

According to the CHP’s report, the impact of the box truck pushing the Buick into the Chevrolet “caused the Buick to fold in half causing fatal injuries to the driver and passenger of the Buick.” The CHP also reported that the truck’s impact caused the Chevrolet to be pushed up on its side.

The Nissan box truck was driven by a 45-year old driver from Corona, who was treated for only minor injuries. At the time of the accident, the highway had been backed up for miles due to rush hour traffic and in preparation for weekend highway repairs which were to shut down part of the freeway.

This horrible accident demonstrates that truck accidents are a deadly threat in Southern California, and that one collision caused by a negligent driver on our crowded highways and streets can set off a chain reaction resulting in death and massive property damage. Because of their size, truck accidents are generally more deadly and dangerous than other vehicle accidents.

If you or someone you love has been involved in a truck accident in Pasadena or Los Angeles, the attorneys at the Law Offices of Andrew Ritholz will work to get you the justice you deserve. With over 30 years experience handling personal injury and vehicle accident cases, including trucking accidents, we know how to establish negligence and put forward the best case for maximum compensation.

For a FREE consultation with a Southern California truck accident lawyer, contact us by completing the form at the right or calling (877) 261-9322 today.