Rising National Rate of Truck Accidents According to NHTSA Report 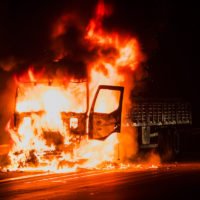 An accident seemingly from a Hollywood movie stopped traffic on the 210 Freeway in Pasadena this weekend when a semi-truck crashed and erupted in flames. The accident is part of an alarming trend over the last decade which has seen a meteoric rise in the number of injury accidents involving large trucks and buses, both non-fatal and fatal, even as the overall presence of large trucks on the road has not changed significantly.

The accident occurred around 7 a.m. on Saturday morning when a semi-truck was traveling along the 210 Freeway in Pasadena. The truck crashed through K-rail barriers onto the Gold Line light rail tracks before erupting in flame. Remarkably, responders from the Pasadena Fire Department reported that no one was injured in the accident.

Three westbound lanes and one eastbound lane were closed for several hours following the accident, as was Gold Line service heading both directions at the scene. The lanes were re-opened by 3 p.m. While the roadway was slippery due to overnight storms over the weekend, the cause of the accident remained unclear.

The semi-truck explosion is part of a larger trend of rising truck accidents over the last decade. According to statistics from the Federal Motor Carrier Safety Administration, large truck and bus crashes have increased dramatically since 2009. The report shows that while the number of injury crashes involving large trucks decreased in the early 2000s from 90,000 in 2002 to 51,000 in 2009, the number has shot back up in the years since. 2016 saw more than double the 2009 figures with an estimated 110,000 injury crashes. The number of deadly crashes has likewise increased in recent years: 4,440 large trucks and buses were involved in fatal crashes in 2016 (4,213 involving trucks specifically), a two percent increase from 2015 and a 29 percent increase from 3,432 in 2009. These accidents caused a total of 4,564 deaths in 2016, up from 3,619 deaths in 2009.