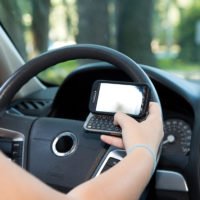 The Federal Communications Commission (FCC) reports that the rapid popularity of mobile communications are linked to significant increase in distracted driving, which causes serious injury or death.  According to the National Highway Traffic Safety Administration (NHTSA), your eyes are off the road on average of 5 seconds when a person reads or dispatches a text message.  If driving at 55 mph, that is enough time to drive the length of a football field.  The risk of being involved in a vehicular collision is increased dramatically when texting.

Texting is the preferred method of communication amongst teens and young adults.  It has been reported that teens and young adults dispatch more than 100 text messages per day.  Approximately 75% of all teenagers own cell phones and 34% of them text while driving. In 2011, 3,331 people were killed in crashes where drivers were distracted; 11% of all drivers under 20 years of age involved in fatal car crashes were reportedly distracted (such as by texting) at the time of the accident.

On average, 68% of teens/young adults do not believe it is easy to text and drive while paying attention to the road and 36% of them have been involved in a near-crash because of their or someone else’s distracted driving.    The American Automobile Association reported that 50% of U.S. teen drivers admit to texting while driving.  Other studies show that at any given moment, there are on average 800,000 drivers texting while using mobile devices; 78% of teens/young adults read messages while driving and 49% of drivers with cell phones under the age of 35 admitted to reading or dispatching text messages while driving.  Their excuse was, they feel a sense of urgency when responding to a text message, as they do not want the sender to feel ignored.

Legal Ramifications of Texting While Driving

Texting while operating a motor vehicle impairs a person’s driving abilities because it takes your eyes off of the road, and increases the chance of swerving, which heightens the chances of an accident – including head-on collisions (the most dangerous type of casualty). Texting while driving usually requires a person to take at least one, if not both, hands off the steering wheel (causing a person to lose control of the vehicle) while decreasing one’s reaction time in responding to an unexpected event on the roadway.  Texting, as opposed to holding a regular verbal cell phone conversation, doubles the risk of a collision, especially since there is an increased chance of missing a street or exit, resulting in rapid and unsafe lane changes.  All of these will have legal ramifications, making a texting driver legally liable for personal injuries caused by unsafe, distracted driving.

While there is no national ban on texting or using mobile devices while driving, it is still illegal and most states have implemented “hands free” laws, banning texting and the use of any mobile devices while driving – this includes even at red lights.  If you have been a victim of a texting driver, the Law Office of Andrew Ritholz can help you assess the value of your damages and seek remedies.  Contact us right away for advice from a seasoned personal injury legal team.