Is it Elder Abuse to Convince Someone to Change A Will 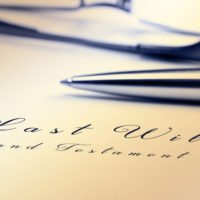 It’s the stuff of tabloid journalism and soap opera plots: a suave individual comes into the life of an older person late in life, and friends and family members are shocked (or not shocked, as the case may be) to find that their loved one changed his or her will right before death in favor of this newcomer. As residents of a free society, we are all free to do what we please with our property, even if that means giving your life savings to the nurse you just met over the son or daughter that cared for you all your life (although states such as California do limit the ability of people to disinherit spouses). But, at the same time, courts will prevent a would-be beneficiary from inheriting if that person used “undue influence” to coerce another into changing the will in that person’s favor. But, beyond the question of whether such a person can actually inherit, there is a further question over whether those actions would qualify as elder abuse, providing grounds for a civil suit by either the elderly person or his or her family in California.

California has one of the most strongest laws against elder abuse in the country – the Elder Abuse and Dependent Adult Civil Protection Act – but it is generally up to elder abuse victims and their families to take the legal action necessary (with the guidance of an experienced elder abuse attorney) to hold abusers responsible and win financial recovery. California’s elder abuse law gives victims and their families a legal remedy against abusers for not only physical, sexual, and mental abuse, but financial exploitation as well.

One of the numerous situations in which an abuser (and in many cases, his or her employer) can be held liable for financial exploitation is where that person uses undue influence to cause an elderly person (65 or older) or dependent adult to change his or her will to benefit himself or another. Even if the elderly person “agrees” to change the will, undue influence will be found if the beneficiary used “excessive persuasion” to overcome the elderly person’s free will in causing the change to the will.

What is and is not excessive persuasion and free will is going to be challenging analysis in many cases, and may require factual investigation, but an experienced elder abuse attorney can work with you to fully investigate the facts, determine whether you or the elderly person in your life has an elder abuse claim, and work to bring that claim.

Contact The Law Offices of Andrew Ritholz, Inc. today at (877) 261-9322 or stop by our offices in Pasadena for a free consultation regarding your situation.