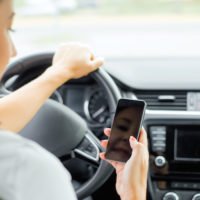 Distracted driving is one of the leading causes of traffic accidents in the U.S. Smart phones make distracted driving an even greater hazard, as texting has become one of the most popular ways to stay in touch. Despite the convenience, phones demand more of your attention than you may realize. A number of things can cause distracted driving, and scientists distinguish among three major types of distractions:

Most analysts consider texting the most dangerous type of distraction, because it involves all three elements. If you got in an accident, and you believe the other driver had been texting, how do you prove that claim? Evidence to support the argument could include:

Proving that the other driver did not demonstrate reasonable care while operating a vehicle will strengthen your claim tremendously, even if you can’t show specifically that he or she was in the process of texting before or when the crash occurred.

What if you were the one texting or on the phone? California’s comparative negligence law would allow the court to find you partially to blame, and it could reduce your compensation accordingly.

How Can a Texting Accident Attorney Help?

Proving negligence can be a difficult task. Every situation is different, and a qualified attorney will need to investigate and evaluate your case to determine what damages you can claim and what strategy makes sense to pursue. Depending on the nature of the accident, certain types of evidence may be difficult or impossible to obtain. California traffic cameras, for example, do not always record and store footage. Thus, they are not a reliable source of evidence.

An attorney can subpoena the other driver’s cell phone provider for his or her messaging records. If he or she sent or received messages, and the time stamps coincide with your accident, that evidence could prove decisive. Contact us to review your case if you believe distracted driving played a part in your accident.