Common Causes of Slip and Fall Accidents in California 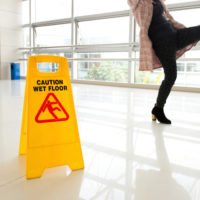 Why is it that the phrase “Help! I’ve fallen and I can’t get up” makes us smile? We all know that falls are a serious issue, and yet that old advertisement has become a bit of a joke. The Centers for Disease Control and Prevention (CDC) tells us that millions of people slip and fall each year. In fact, according to a CDC report, 1 out of 3 older Americans falls each year, with less than half reporting the incident to their doctor.

The truth is, it can happen to any of us. While balance is wonderful thing, plenty of circumstances make it tough to stay upright.

Carrie is a student at a small, private university in Southern California. She works part-time in the school library to help pay expenses. There were several small tears in the carpet that covered the library floor, a fact that Carrie often noticed but never worried about. It was shortly after Christmas break that Carrie was busy returning books to their shelves. The toe of her new boots caught in one of the tears and brought her to her knees – literally. Carrie’s kneecap was dislodged and her right wrist broken as she attempted to brace her fall.

Lou is an active 65-year-old and prides herself on keeping in shape. In fact, rather than take the elevator at the gym, Lou liked to skip up the stairs to her twice-weekly Zumba class. A recent mopping had left more than a little water on several steps, a fact Lou never noticed. One slip caused her to fall down four stairs, severely injuring her back.

Charlotte Sparks was once a U.S. history teacher, and she loves nothing more than to visit historical sites. While visiting a Northern California fort, she fell between two loose floorboards, breaking her hip.

Ted is a tough guy. Ask him, and the ex-sailor will tell you. He is also an alert gentleman. It was in a major department store – of all places – that Ted suffered his fall. He had just looked up to see something his wife was pointing out when he fell into a small hole in the floor. It was clear that repairs were in the midst of being made to the hole, but the workmen had walked away and left no warning signs.

So many falls occur under innocuous-seeming circumstances. If you have questions about your own slip and fall accident, contact the Law Offices of Andrew Ritholz at (626) 844-7102 to learn about your options for obtaining fair compensation and holding the liable property owner to account.