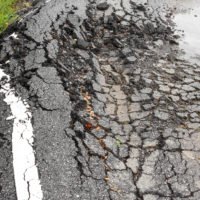 The United States has a network of roads that extend over four (4) million miles, and more than 2.6 million miles of that network is composed of paved roads maintained by the government. So it’s no surprise that there may be defects somewhere along these roadways at various times. Defects in California road conditions can cause an accident, and may lead to a highway defects lawsuit. Knowing about the dangers of highway defects and what the state of California is responsible for can help you determine if you should pursue a highway defects lawsuit.

Who is Responsible for Maintenance of California Roadways?

If you believe a roadway defect was responsible for your accident, you will first need to determine if the government agency responsible can actually be sued. Most government agencies, including states and the federal government, have immunity from lawsuits, which means that they cannot be sued (called “sovereign immunity” when it is applied to the federal and state governments, and “governmental immunity” when it is applied to city, county and other smaller governments). Whether a government agency ends up being responsible for the defect in the roadway or not, you should report all hazardous road conditions to local agencies to benefit other drivers on the roadways. If you think you have a highway defects lawsuit, contact the experienced attorneys at the Law offices of Andrew Ritholz today.