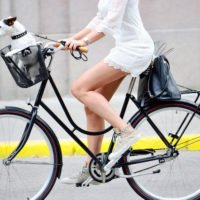 California is a state synonymous with car culture, but more and more California residents are leaving the car keys at home, either to commute to work, get some exercise, or take a leisurely trip around the neighborhood. There are many benefits to biking around cities like Pasadena – saving on gas, getting some exercise and helping out the environment – but there are downsides as well. One downside in particular is the number of biking accidents that occur due to more bikes on the road.

In 2014, the Governors Highway Safety Association (GHSA) released a study showing that U.S. bicycling deaths increased 16% nationwide in just two years between 2010 and 2012. That’s an enormous increase in deaths for such a short time. The study pointed out that California in particular had the highest number of bicycle deaths in the entire country with 338 deaths over that period, and a 23% annual increase.

Of further note, the report indicated that over 60% of those killed were not wearing helmets at the time of the accident, and that a quarter of bicyclists over 16 had a blood alcohol level over the legal limit for driving.

Experts also note that, due to the increase in commuting by bicycle, accidents can occur due to the fact that bicyclists are often sharing lanes with motorists who have little concern for the safety of the bicyclists.

If a bicyclist has injured due to the negligence of another, then he or she can bring a claim for all resulting damages from the accident: medical bills, lost wages, pain and suffering, reduced income potential, damage to property, and other damages. Because a bicyclist does not have the protection of car safety devices such as seatbelts and airbags, their injuries can often be severe, requiring high medical bills and long periods of rehabilitation.

Potential defendants in a bike accident case include any and all negligent drivers who contributed to the accident, negligent pedestrians or other bicyclists, manufacturers and sellers of defective bikes, and even the owner of the property on which the accident took place if there was a dangerous condition leading to the accident.

There is no requirement that a bicyclist have been wearing a helmet in order to bring a valid negligence claim, and, even if the bicyclist was partially at fault in causing the accident, he or she may still bring a valid claim against a negligent defendant in many instances.