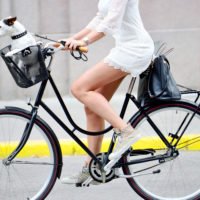 If any American community is known for its traffic or motor vehicle culture, it is Los Angeles. LA is home to endless freeways and strip malls, traffic snarls, smog and a dearth of bicycle lanes though the city has installed over 200 miles of bike lanes in the past few years. Still, there are many brave or adventurous souls who defy LA’s car culture and take to the roads on their bicycles, though some would shake their heads and call them fools or worse. Statistics show that 150 cyclists were killed in California in 2012 and that about 5,000 suffered injuries or fatalities while biking in the Los Angeles area.

Bike commuting in Los Angeles, though, is not a fool’s concept and many do so on a daily basis. You just have to consider a few safety tips and be sensible about where you are going, how to get where you want to go and how to do so while avoiding heavily trafficked roads and hazards. After all, few places in the US have the warm weather and lack of violent storms, snow or tornadoes that should make the LA area a mecca for cyclists. Here are few safety considerations if you plan on commuting in Los Angeles.

A recent state law mandates that motorists must give bicyclists at least a 3-foot passing zone, meaning they cannot come closer than 3 feet when passing a bike or face a fine of $35. If the car comes closer than 3 feet and an injury accident occurs, the driver could be fined up to $220.

If you were injured on a bicycle by an inattentive or frustrated motorist, you have the right to sue for your injuries and to collect compensation for your medical expenses, lost earnings, permanent disability and for pain and suffering. Contact bike injury lawyer Andrew Ritholz who can advise you of your legal rights and how to obtain the compensation to which you are entitled.